Hey folks! It was a really light week, in fact if it weren’t for the fact that my copy of The Reunion came in there’d only be Captain Britain to talk about – although it was a really good issue as you’ll see! So I’ll get right into it. Before we begin I just want to remind you…

!!!!!!SPOILER ALERT!!!!!!
I’m going to talk about what’s involved in the stories so if you haven’t read these books, and you don’t want them spoiled, then you should stop reading now! 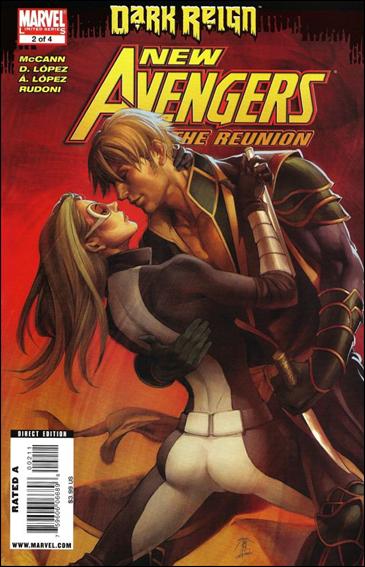 I’ll start with New Avengers: The Reunion #2 since it really should have been featured in last week’s stack. This story continues the first adventure of Ronin (Clint Barton) and Mockingbird since Mockingbird has returned from the Skrull planet in Secret Invasion. Jim McCann is on writing duties with David Lopez and Alvaro Lopez doing pencils and inks respectively. I’m going to start with the art. It’ is very dynamic, very smooth, and very anime. It’s not my favorite art style, but there is no way that I can call it “bad.” I thought that it was especially good in the opening fight between Mockingbird and Ronin (it is so strange to call Hawkeye Ronin. Can’t he just be Hawkeye again please?). It played like straight up anime with the speed lines and crazy jumps and it actually looked like the figures were moving! Very impressive!

In this issue we get to explore why Mockingbird has been so distant with Clint and when she was taken by the Skrulls. There was another neat art thing done for the flash back sequences where it looks almost like they just transposed panels from old issues of West Cost Avengers and laid them on these pages. The difference in art styles is just noticeable enough and made my inner fan boy happy with how much attention they paid to the grit? Bubbles? You know, what do you call it when they used colored dots to make the shades in old comics? Whatever you call that is what they did and it was neat! So, as I think we all kind of guessed, Mockingbird was replaced right before the big fight where she died – or really the Skrull died. Although, and I had to look this up, Mockingbird died defending Hawkeye from Mephisto, but in this story they were apparently fighting Ultron? Or maybe those were two different fights? That’s still a little confusing for me and it there are any Mockingbird fan boys out there that can help a brutha’ out with continuity that’d be great.

Since Mockingbird’s return she has set-up a new counter-terrorist group with the ex-S.H.I.E.L.D. agents who were also taken by the Skrulls. They are on the heels of A.I.M., who are going to kill a bunch of diplomats. Really, the whole bomb storyline feels kind of lackluster in the midst of the drama between these two characters. Especially when they start to discuss the current state of their relationship and that…

…Mockingbird wanted a divorce and still does. She was done and isn’t looking to get back into a relationship with Clint at all! CRAZY!!!! The issue ends on that cliffhanger. We’ll see what happens next issue.

Captain Britain and MI13: MAN THIS IS A GOOD BOOK! I have to admit, I was not crazy about the art when this book first started. I’ve always preferred more photo realistic art. It’s a personal preference, I don’t know enough about art to defend why, all I can say is I don’t know art, but I know what I like. Now I know I like this. There is a cartoon sensibility to Leonard Kirk’s work. It looks like a comic book and it took twelve issues for me to “get it.” I’m about to parrot all the things I’ve heard from other reviewers but, for whatever reason, I feel this issue excelled at. The acting on these characters is GREAT! The subtleties on the faces are so good that it really is easy to miss even though you can’t miss it. You feel the pain of Spitfire as she is forced to vampiricaly feed on a peasant. No words are needed, just the strain on her face. The details of all of the back grounds and characters… Even though it isn’t photo realism, these characters all feel very real because Kirk pays attention. I had to go back and look at the other issues and all I can say is wow! He really has been doing this since issue one and I think it was just a case of him doing such a good job I took it for granted. He made it look too easy.

Story wise, Paul Cornell has made Dracula a real villain again and he is dangerous! His invasion begins this issue and Mr. Cornell does a great job of showing us how Dracula is a great tactician. The team is cleaning house at MI13 to get all the vampire spies out of the building and they need to find an artifact that can keep all vampires out of the UK, unless they are invited in. I really feel funny talking about this too much because it was such a fun ride that I REALLY think you need to go out and pick it up. Vampires using magic, philosophical discussions about what it means to be a vampire, a giant battle ship crewed by vampire soldiers and somebody’s dad is being turned!!!!!!! The MI13 team is full of powerful individuals, but the vampires are equally powerful – and a whole lot more cut throat! I can’t wait to see what happens next month!

That’s it for comics this week! See you tomorrow!