There are previous posts about my geekness.  I’m a guy who still plays D&D (3.5 with the same guys who I’ve been playing with for about 20 years), I love scifi, horror, & fantasy and I’m a Warhammer 40,000 gamer.  I’m going to let my freak flag fly and start doing blogs under the Geekatude banner where I’ll talk about stuff I’m doing associated with my hobbies and whatever else seems kinda’ geeky.

To start I’m going to show off some of the current hobby projects that I’ve either just finished and the ones I’ve just started.  First things first – I’ve FINALLY finished my Mordheim Witch Hunters warband! For the un-initiated Mordheim is a Games Workshop table-top skirmish game.  You can learn more about it HERE.  The last time I played this game was 2003.  Yeah, it was a long time ago.  I’ve been a bit busy.  The Witch Hunters are religious zealots who wander the streets of Mordheim beating mutants and rat men and anyone else who crosses their path.  Insert your own political joke here.  The Witch Hunters themselves look like really mean pilgrims and they are followed by crazies and flagellants and keep warhounds.  Here’s the whole warband: 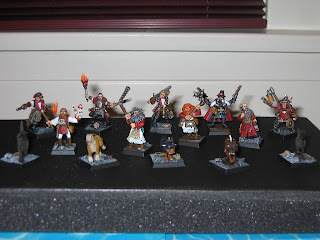 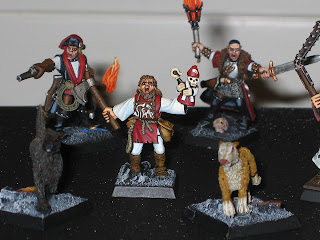 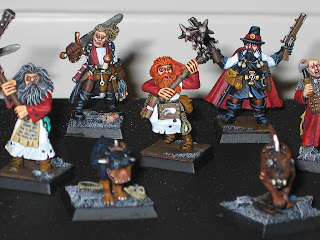 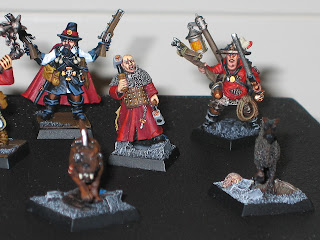 I was playing in a league when I put these guys together and did well enough, but I’ve always wanted to play them again, I’m hoping I’ll get the opportunity in the next league – Mordheim is not a widely played game.  These are some of my favorite guys: This is a warhound based on Frankie.  This bit of resin is 1000 times more vicious than the real Frankie. 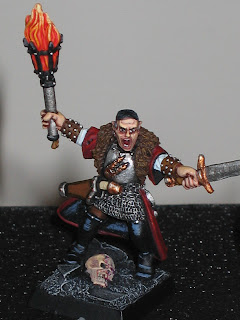 This is my WH Captain.  That contorted face is the face of righteous anger! 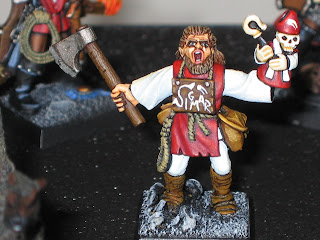 This guy is so zany he fights with a hand puppet. 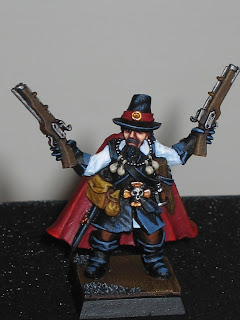 This was the guy I finished when I started painting again this year.  Started in 2003, finished in 2011. 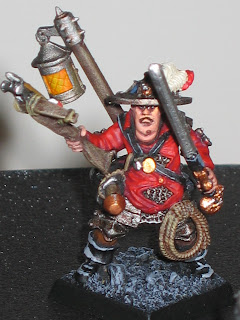 This is the bounty hunter I finished before starting the new project.

On the “New Project” front I have started filling in the troops for my Warhammer 40,000, AKA 40k, army (learn about it HERE).  I used to be a Space Marine guy, at the time I had more money than sense and bought a LOT of armies – Nurgle Chaos Marines, Tau, more marine stuff and loads more plastic and pewter than a man could ever paint or use.  These extra bits came in handy when it came time to pay for my divorce, but I kept the Imperial Guard Army because deep down that was always the army I wanted (although I have had some pretty good Space Marine ideas again… but they’ll have to wait…).  This is the state of my paint station as of this afternoon: 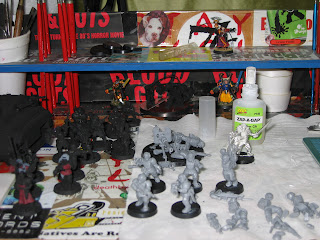 If all goes to plan, as slim a chance as that might be, then I should have a fully painted 1,500 points of IG by the end of summer…

…or a lot of primed plastic.  We’ll see how things go.