A Week in Re-Cap – But only One Picture

Really I could talk about a lot more than a week, but I’ll try and keep it centered around the last week’s worth of events – unless I ramble and start talking about other things too.  We’ve been busy lately!  Shooting for the documentary has ramped up and the next six to eight weeks are going t be packed!  Today I get to purchase my doctorate.  Still debating whether or not I’m going to be a doctor in gravy or pick a better “specialty.”

I love my job!  We have business meetings in the best places and last week we had one at a K1 Speedway in Gardena.  Open racing, Chinese food and a healthy dose of manly competition (even the women were feeling manly)!  A friend of ours was having an event for the pre-production of their new film “Super Go” which is about, you guessed it, go-kart racing.  I’ve been indoor go-kart racing before, but I have to give it up to K1 – who is not endorsing me – for a pretty killer time.  The karts were smooth and quick, they took a surprising amount of punishment (all unintentional, of course) and
all done with electric motors!  Here’s a view from my kart before the start: 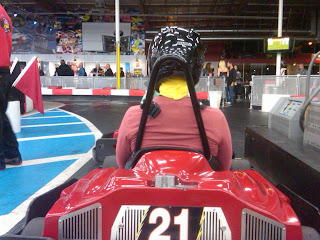 Since it was a private party they weren’t really keeping great stats, but I’m pretty confident that, even if I wasn’t winning a lot, I was a top racer.

When we were done I felt like I’d just played Grand Theft Auto for eight or nine hours straight.  I had to cool off before I felt safe getting back in my own car and even when I did it felt very different to drive a real car again.  Zeke said we should just make movies about go-karts from now on so that we can have an excuse to race more.  I can’t argue that, it’s a good idea

Off to shoot more movie stuff!