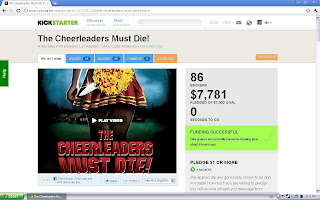 Holy Crap! We totally did it!

Not only did we do it, but the phone has been ringing off the hook since the campaign finished. A nice side effect to the campaign is that the awareness of the film has gotten much higher than we thought it would.

There’s actually a great deal of work to do and by 10:42am my battery in my cell phone was almost dead.

Now I need to make sure that this work gets done!

Hopefully I’ll have a video about all this stuff up later today.

Also, in case you haven’t heard it enough, thank you so much for all your support!

It’s been fantastic and it’s left us feeling loved and awed.

Anyway, this blog is probably going to feel pretty disjointed, I keep leaving it to do other things so I’m going to bail.