The Baker-Eccleston Principle – The Two Whos Who Wouldn’t Return 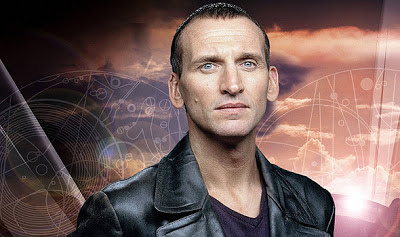 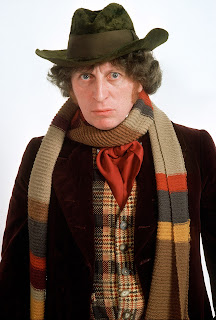 Doctor Who, the cultural phenomenon that has spanned 50 years now, has it’s official 50th Anniversary Episode coming this November. Traditionally this is a chance to bring back actors who have previously played the Doctor and team them up to battle an evil so great that one Doctor simply isn’t enough. Well, I say traditionally, but it’s only happened twice: “The Three Doctors” for the 10th Anniversary and “The Five Doctors” for the 20th Anniversary. (OK, three times, but do we really want to mention “Dimensions in Time?”) But there are two actors who have played the Doctor who have refused to return for these specials, Tom Baker for “The Five Doctors” and Chris Eccleston for The 50th Anniversary. So what’s up? Why would these guys not come back? They have their reasons, but lets look at the history. 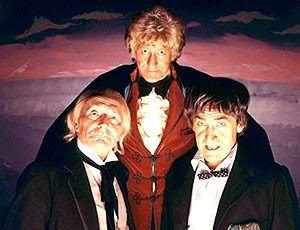 The three doctors went off with very few snags, the only major one being that William Hartnell, the first Doctor, was in poor health and couldn’t handle a normal shooting schedule so all of his scenes were made to be done via view screen. They battled an ancient Timelord, Omega, who was responsible providing the energy that supports Timelord civilization. Omega got stuck in an alternate dimension, went crazy, wanted revenge – generally bad news. This story is available on DVD and worth checking out if you’re into classic Who.
Here’s a link to the Special Edition:

And to the original for you purists: 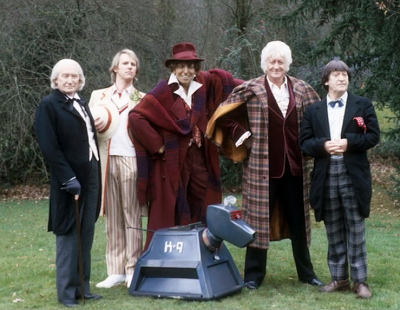 Then came “The Five Doctors” and things were a little different. Not only was William Hartnell replaced due to his unfortunate death, but Tom Baker refused to return. The 20th Anniversary came two years after Tom Baker leaving the show. He had been, and continues to be, the actor to play the Doctor the longest (1974-1981) and, according to many sources, was concerned about returning to the role after having done it so recently. In fact he even backed out of the photo shoot for the show so they used the Madame Tussaud’s wax figure in his place (see image above). While the official word was that he didn’t want to play the role again so soon, there are also plenty of behind-the-scenes reasons that may have affected his decision. Having been the Doctor for as long as he was, there was a certain amount of control that Baker had on the show. With long time producer Graham Williams and writer Douglas Adams, of “Hitchhiker’s Guide to the Galaxy” fame, leaving at the end of the 17th series Baker was the strongest voice to want to maintain the  tone of the show. Then new producer, John Nathan-Turner, came on in 1981. He wanted to move away from the comedic elements and make Doctor Who more of a drama, especially since ratings were dipping due to the American import “Buck Rogers.” The cast, led by Baker, did not agree. It’s likely that this off-air friction had an influence on his decision and the fans suffered for it.  As time has passed Baker has confessed that he regrets not doing the show and is even open to doing something in the 50th anniversary show.

Even without Tom Baker, “The Five Doctors” is regarded as a classic. Here is a link to the 25th Anniversary DVD: 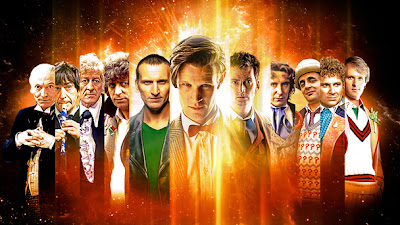 It’s off-air frictions, again, that seem to be getting in the way of the latest Anniversary show as well. When the show was revived in 2005 by Russell T. Davies Chris Eccleston was brought on to be the Doctor. Personally I remember this pretty well. The first episode, “Rose,” was a great transition back into the world of Doctor Who in my opinion. We spent a lot of time with the Rose character first, showing what her life in modern day London was like. We are introduced to the Doctor as an audience the same way she is; suddenly, briskly and bluntly. From that moment on the show just propelled you from adventure to adventure. The re-launch was a hit and the rest is history, but we only got one season of Eccleston’s Doctor. For a long time his departure has been debated. Publicly it was stated that he didn’t want to be typecast and that he was only contracted for a year because they weren’t sure if the show would be a success, but he recently spoke more on his reasons for leaving at an event at the Theater Royal in Haymarket stating:

“I left Doctor Who because I could not get along with the senior people. I left because of politics. I did not see eye-to-eye with them. I didn’t agree with the way things were being run. I didn’t like the culture that had grown up around the series. So I left, I felt, over a principle.

I thought to remain, which would have made me a lot of money and given me huge visibility, the price I would have had to pay was to eat a lot of shit. I’m not being funny about that. I didn’t want to do that and it comes to the art of it, in a way. I feel that if you run your career and.. we are vulnerable as actors and we are constantly humiliating ourselves auditioning. But if you allow that to go on, on a grand scale you will lose whatever it is about you and it will be present in your work.”

“If you allow your desire to be successful and visible and financially secure – if you allow that to make you throw shades on your parents, on your upbringing, then you’re knackered. You’ve got to keep something back, for yourself, because it’ll be present in your work”, he added.
He concluded, saying “My face didn’t fit and I’m sure they were glad to see the back of me. The important thing is that I succeeded. It was a great part. I loved playing him. I loved connecting with that audience. Because I’ve always acted for adults and then suddenly you’re acting for children, who are far more tasteful; they will not be bullshitted. It’s either good, or it’s bad. They don’t schmooze at after-show parties, with cocktails.” – From DenOfGeek.us

This has carried over, somewhat, to the 50th Anniversary show. Even though Russell T. Davies is no longer the showrunner, it seems that the baggage of the past is still too much to over come. Official word came from the BBC that,”Chris met with Steven Moffat a couple of times to talk about Steven’s plans for the Doctor Who 50th anniversary episode. After careful thought, Chris decided not to be in the episode. He wishes the team all the best.” And that, appears, to be that.

For those of you who may have missed it, I really do think that the 2005 stories are a great way back into the Whoniverse. Check out the first series:

So what do you think? Do actors have a responsibility to the fans on cult shows like Doctor Who to return for events like this? How much do you feel you are owed? I look forward to your comments.

PS – OK, so, yeah, there’s “Dimensions in Time.” It was the 30th Anniversary show that was released after the show had been cancelled back in the late 80’s. It was a crossover with East Enders, a popular English soap opera. It’s not good and it’s not available on DVD so here’s the full video from YouTube:

Also here’s a link to an IO9.com blog post about the deleted scenes. Watch it at your own risk.

Filed under behind the scenes, commentary, doctor who, geek, television