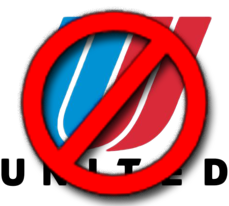 I will never fly United Airlines or any of their affiliates ever again.

Rene and I recently flew United as part of a work retreat to Hawaii and it was the third and final time we will ever use them. Hell, the only reason we’ve flown them the last two times is because someone else purchased the tickets. I could re-hash the story for you, but I feel that my complaint letter will do better:

Turns out we are far from the only people who have had problems with United – there’s a whole Facebook fan page dedicated to how much they suck: United Sucks.

They have a tendency to kill dogs on their flights. These two garnered national attention.

And they break guitars:

He has multiple songs about this and a nice statement. He’s Canadian and here’s his YouTube channel: Sons of Maxwell.

I want to take comfort in the fact that other people have had trouble too, but unfortunately every story has a very similar ending – United doesn’t care and won’t do a damn thing to make it better. So, as far as I’m concerned, they need to go out of business.

That’s why I hope you’ll join me by saying Never Again to flying United. Maybe, when the airline is shut down, the employees who are able to get new jobs in the air travel industry will get proper training from a better, more customer conscience carrier.