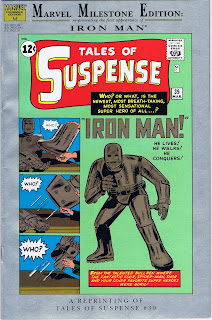 It’s fitting that the walk down memory lane starts in the easiest kind of way, Tales of Suspense 39 is the first appearance of Iron Man and is also the first time that I bought a re-print of a comic, that I really wanted the original of, on purpose. Released in 1993, this Marvel Milestone Edition of Tales of Suspense 39 was released for the 30th anniversary of the year of creation of the first wave of the most popular super-heroes in the Marvel universe. Even though at the time Iron Man was not a popular hero, copies of the actual, original ToS 39 were going for far more money than I could justify spending. Now that the movie is out this issue is skyrocketing! I satisfy myself with this facsimile, but it has some desirable aspects.

First, let’s start with the fact that the book itself is still in amazing shape. No creases, no bends and no discoloration. It’s printed on modern 90’s paper so it’s glossy and really shows off the color, which leads us to… 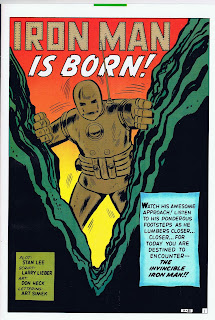 …the art in this version looks fantastic! It’s easy to think of old 60’s artwork as cheap or less sophisticated because comic books were printed on newsprint so the lines and color would run. This “fully restored” version shows the art how it could never have been printed before. My appreciation for Don Heck exists mostly on the presentation of his art in this copy. 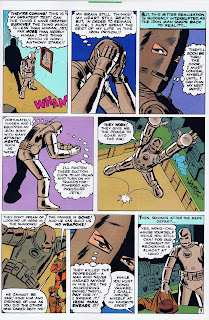 The story itself is the height of 60’s comic book storytelling. In thirteen pages we are introduced to Tony Stark and his amazing life, see him showing off his scientific genius for the U.S. military, getting blown up in the jungles of Vietnam, given the “deal with the devil” offer from the Vietcong, see him build the suit, watch Yinsen die and then marvel at Iron Man reaping his vengeance against Wong Chu and the Red Army. It almost takes thirteen pages just to list it all! In today’s decompressed style comic books this would have been a six issue arc. In the end it promises that we’ll see more tales of the Iron Man in the next issue, but we’ll get to that later.

There are other stories in the book, very Twilight Zone-type stories. They are enjoyable, but have nothing to do with Iron Man so I’ve decided not to mention them here.

Now Tales of Suspense 40 is a whole different story! This issue is beaten, bruised and smells like an attic. The edges of the cover are ragged and this issue is probably barely worth more than its cover price. 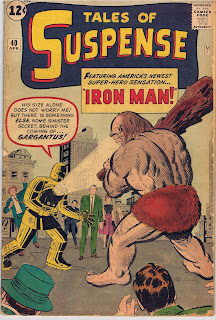 I scored this issue from a baseball card shop that had a single short box of comic books on the floor by the front counter in West Covina. My sister used to ice skate and her training rink was there. During the summers I had very little to do. They had an arcade, I got VERY good at Crystal Castles and Discs of Tron, but I went through quarters like it was Kleenex in allergy season. There was another boy there, his parents owned the snack bar I think, and we would go raise the pre-teen, well behaved equivalent to hell. Checking out the card shop next door was part of that. This issue features more plot by Stan Lee, a script from R. Berns (don’t know what the “R.” stands for), art from Jack Kirby, inked by Don Heck and lettered by Duffi (this might be wrong).  Part of the spine of the cover just tore, this issue is so old. The difference between the “fully restored” 39 and the “authentically worn” 40 is astronomical. Having seen how the art looked in 39 it’s easy to imagine what the original boards must have looked like, but… I don’t even know what to say, just look: 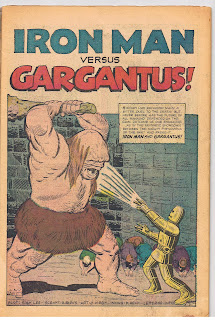 Even faded, the gold of the armor is striking versus the grey. The important part of this story is that Iron Man painted his armor gold this issue so that he didn’t look frightening to women and children. Comic story aside (he fights a robot cave man sent to Earth by little green aliens that never make an appearance in a Marvel comic again, oh but that’s after he battles a bunch of big cats that get loose at a circus – why do circuses play such a large role in 60’s comics?) the real story is how I snaked this issue. I don’t know that I was unethical, but the other boy at the rink mentioned that he saw an Iron Man comic at the card shop when I told him that Iron Man was my favorite. He’s the one who showed me the issue. Now, he never expressed any interest in the issue, he was a Batman guy from what I remember, but after I bought it I showed him and I still have a clear memory of his face dropping and him saying, “Oh, I was gonna’ get that.”

Now, really, I don’t think he really was going to get it. He often talked about stuff that never happened, but that look on his face in the booth by the pinball machine is still stuck in my head.

That being said, my enjoyment of the issue never suffered. I’m not sure what that says about me.

Then there’s a massive gap in my collection – I never had much luck finding affordable back issues of ToS – so the next issue is Tales of Suspense 97. I have no memory of purchasing this issue. When I pulled it out of the long box I was surprised to see it. It is an important issue in that it is part of the story that leads up to Iron Man number one, but I didn’t even remember the cogent points of the story except that Whiplash is in it  – but I know that from the cover. 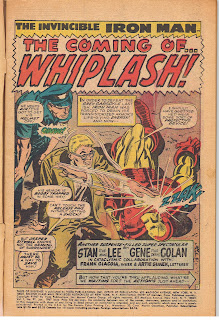 Reading it was actually really nice because it was like reading it for the first time! By this time ToS was re-branded to be the monthly adventures of  Iron Man and Captain America. The differences between the storytelling style of 1963 and 1967 is actually pretty big. There’s definitely less “gee wilikers” and more, actually I’m having a problem coming up with a clever two-word distillation for this, depth and intrigue. Instead of always being at a circus where animals are always getting loose Iron Man has just defeated the Grey Gargoyle and his armor is out of power. Iron Man’s major nemesis until the late 70’s was not The Mandarin or the Crimson Dynamo or even Titanium Man, it was his battery life. This guy was a generation 1 iPod as far as how long he could hold a charge and, of course, his power would always give out at the worst moment. This is a plot device that we’re going to see a lot more of. SHIELD is involved, there are cool spy gadgets, there’s a mob gambling sub-plot that involves Tony’s cousin, Morgan – more about him in later issues – and a secret new leader for the preeminent crime family in New York – The Maggia! 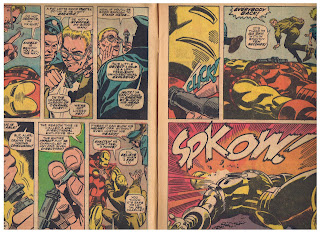 The end is a cliff hanger: Iron Man is freshly out of juice, Whiplash is about to attack and we find out that Tony’s cousin, Morgan Stark, is a shit.