Project: Iron Man Issue 23 or Check out the threads on this guy! 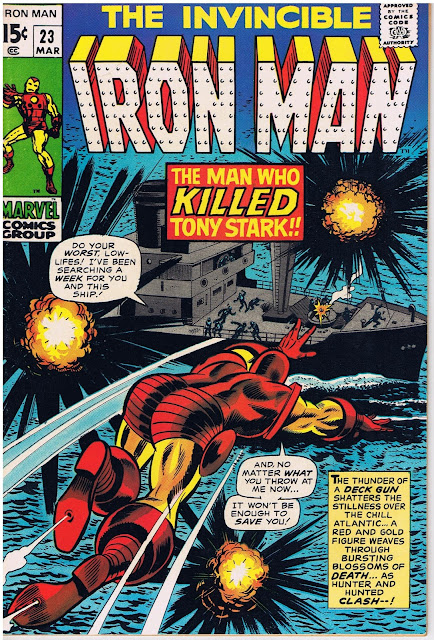 Dead, dead – not coming back (but don’t hold me to that). And Shellhead goes straight into avenging mode and sinks the ship that brought the Titanium Man into the country. 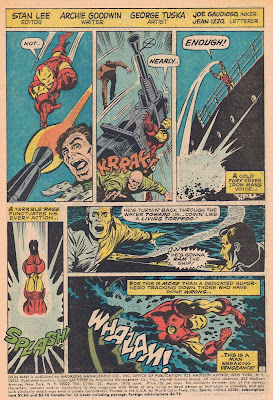 Straight up sinks it. Sure he says, “The Coast guard will pick them up.” But when you see what damage is done to the ship I think you’ll agree that not everyone made it out unscathed. 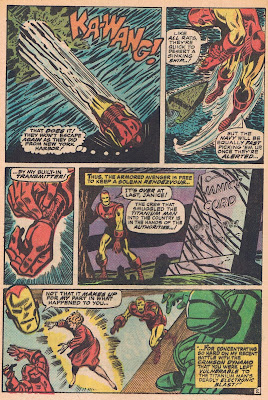 But after he visits Janice’s grave this comic makes a hard left into Silver Age storytelling land. I’ve been wavering on my opinions of this issue. It’s one of the issues that I have no memory of ever reading before. When I was originally collecting my Iron Man comics I didn’t get them in order so I didn’t read them in order – except for the issues that were current at the time. From issue 200 on I was solid on continuity. Even the late hundreds before 200 are squared up pretty good in my head, but these early, early books with very short, sometimes only single issue, story arcs just got lost. Before I’d buy what I could find, read it, and bag & board it. I rarely went back to read the early ones – I didn’t want to damage them. To a certain extent that behavior paid off. These books, which are nearly fifty years old(!), look great, aren’t brittle and look like they could stick around for another fifty years. It also means that, with a mature, adult brain I’m reading some of these stories for, essentially, the first time.

With all of this in mind let me introduce you to THE MERCENARY! 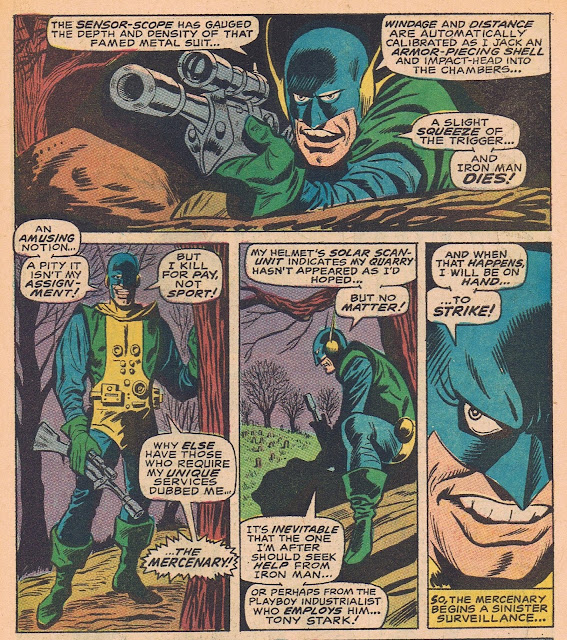 It’s ok, get the laughter out now. That outfit isn’t going anywhere.

Early in a superhero’s run lots of shots are taken at creating his rouges gallery. Most of the bad guys a superhero faces in modern comics were actually created decades early in the hero’s career, with a few notable exceptions who aren’t worth mentioning now. But not every villain created in the Silver Age is worth keeping and The Mercenary definitely counts as one of them that can afford to be forgotten.

Outfit aside, he’s a hired killer who has a lot of gadgets and training.

A LOT of gadgets. 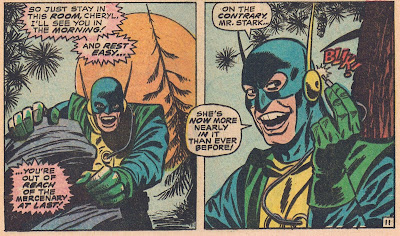 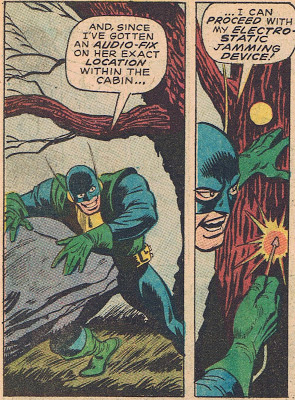 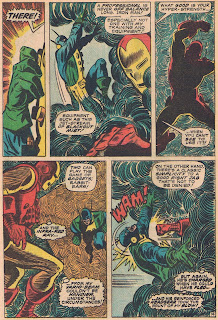 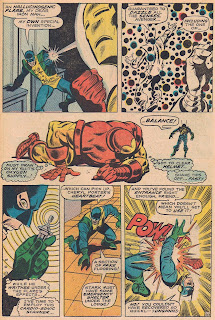 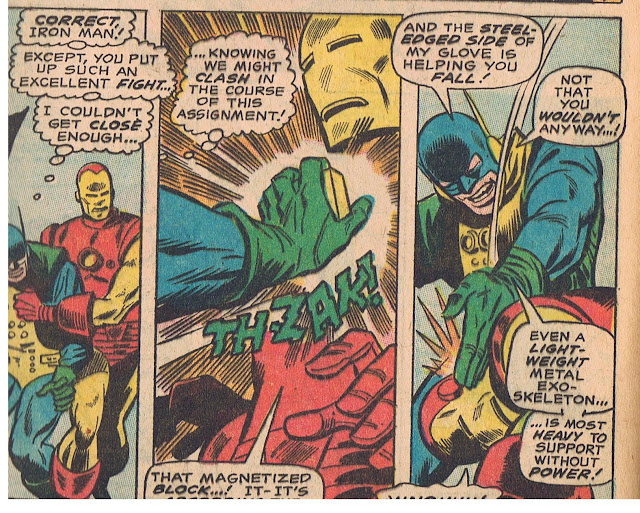 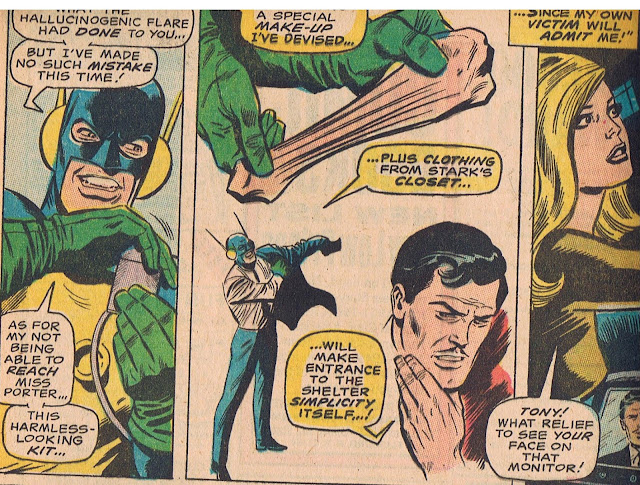 And check out how well he lounges in a chair: 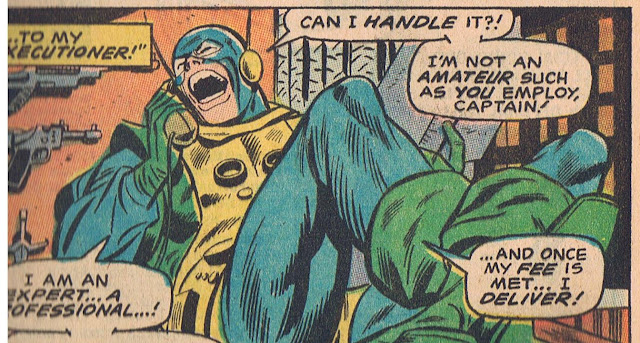 Gadgets that are just a shade too convenient and applicable to the situation. It’s like the creative team read a Batman comic of the day and decided this bad guy should have a utility belt too.

Plot wise, this issue does a lot to close some loopholes.

All of this made possible by a damsel in distress – the wife of one of the pirates. Really, that’s not important, but this splash panel is: 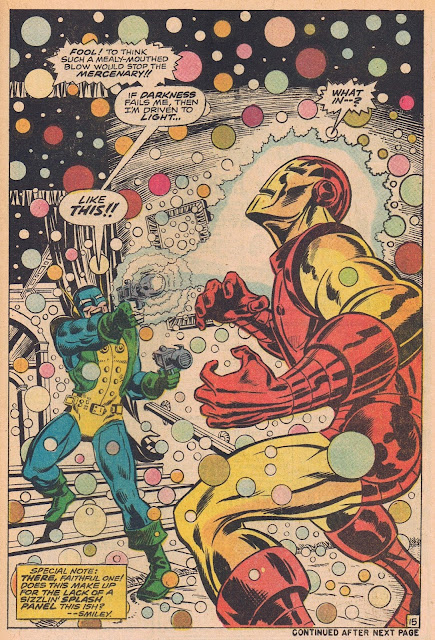 It’s the one time The Mercenary looks cool.
When all is said and done the girl is saved, the bad guys are both dead (which doesn’t bode well for The Mercenary coming back – but that’s probably for the best), 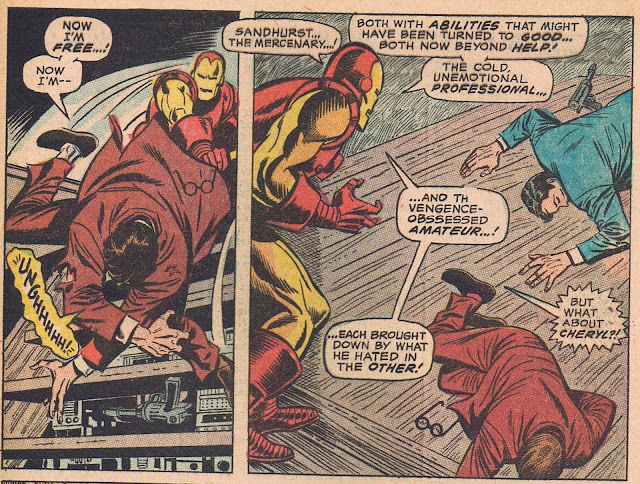 and Iron Man walks off with her into the sunset. 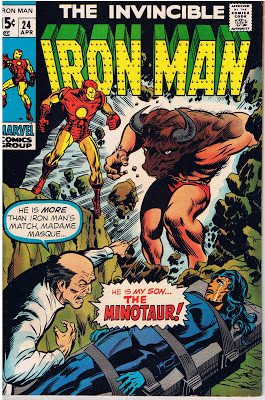 Seriously. This is what was happening in Silver Age Marvel comics.
See you next time!