I’m not sure if you’ve heard, however if you’re in the North Orange County area of Southern California then that’s pretty unlikely, but there is a new new burger joint in town.  It is very popular all over the country.  It is blogged about by people other than me, it is praised in Zagat surveys and it’s even been mentioned in the pages of Marvel Comics.  Five Guys Burgers & Fries has opened in Orange near the 55 freeway and it’s making the same kind of splash that Krispy Kreme and the iPhone made when they first came out.

There are lines around the block, excitement from those in the line and high expectations.

Maybe those expectations are a bit too high.

Dean and I went to Five Guys for lunch and ordered some of these nationally renowned burgers.  Burgers that, if you believe the hype, are “…better than In-N-Out!”  We ordered bacon cheeseburgers, which come standard as “doubles,” and I had mine with  lettuce, tomato and grilled onions – just like my Double Doubles.  I also ordered the Cajun fries and washed it all down with a root beer. 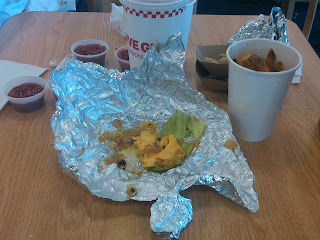 I intended to take a picture before it was eaten, but I dove right in.  Dean put it best when he said, “…you didn’t even put it down!”  So as you can probably tell I liked it.  It was a really good burger – but it was far away from being the “best” burger I’ve ever had and that got Dean and I in a discussion about hype vs reality and the Apple phenomenon.

When it comes right down to it I still like In-N-Out burgers better.  There is a taste to In-N-Out burgers, a kind of salty hint, that is what I look forward to when I know I’m getting In-N-Out.  The taste gets me excited!  Five Guys doesn’t have a specific taste.  Dean and I both agreed that it tasted like a really good homemade burger.  Desirable?  Totally, but I know what it tastes like because I make burgers like this at home and when I’m out I don’t want to feel like I just paid more for something I could have made myself.

I felt kind of tricked.  Yeah, the food and fries were good and made from “high quality ingredients” but it wasn’t the life changing experience that the press had told me it would be.  That’s the downside of hype.  If the product can’t live up to what it has been built up to be then, even if it’s a great product, it’s disappointing.  Dean and I were drawing comparisons to other things that get a lot of hype that we don’t seem to get like Chickfilet and Apple fanboys.  I have never seen why Chickfilet is so popular.  I find them bland and expensive, but fans of the chicken treat it like the white meat second coming!  And I think we all know, or are, an Apple fan boy.  The thing is that these products are good, great even, but do they warrant the price or praise that is associated with them?  How much are you paying for quality and how much for the prestige of the name?  And with the iPhone 4 it had a great launch and continues to sell well, but it’s legacy is marred by “antenna-gate.”  Krispy Kreme had a great shot out of the gate, but since then they’ve had to close stores and they are far from the glory of the late 90’s.

So it remains to be seen if Five Guys will go the way of Apple or the way of Krispy Kreme, but if you’re in the neighborhood and you’ve got a good two hours to blow stop in a try a burger, just adjust your expectations.  You don’t want to be a victim of the hype.