Watching LOST with Dean tonight and I picked up food before I got there.  When we spoke on the phone and decided on what food to eat the only stipulation that I gave was that I did not want Wing Stop again since it made me gassy so, naturally, we narrowed it down to pastrami sandwiches from The Hat and an order of onion rings.

For those of you who may not be familiar with The Hat they make really good pastrami and if you are a fan of french fries covered in gravy, like yours truly, then this is the place to go.  It is also the destination for anyone who can devour a metric ton of onion rings because that’s how big a single order is.  I mentioned on the phone that I was getting onion rings and Dean said, “Really?  Are you sure?”  Then later when we actually poured them onto a plate we started to wonder if we shouldn’t invite over the neighbors and maybe a starving family of four to help finish them off.

It was an amazing amount of rings.  The grease alone could power an alternate fuel car for at least a year.  I can still feel it coating my throat and it took about twenty minutes to scrub it off my teeth.  The bag was see through, yet still held together by the power of grease.  Just describing it all makes me wonder why I ate them in the first place, but then I remember – they taste AWESOME!!!

The only problem I had with The Hat tonight was that I ordered a Dr. Pepper and got a Diet Coke!  DIET COKE!!!!!  I ordered a pastrami sandwich and coronary inducing onion rings,  a Diet Coke isn’t going to make up for all that.

Although they probably didn’t do it on purpose, it felt deliberate.

Today’s picture is the mountain of onion rings that were left after we ate our fill: 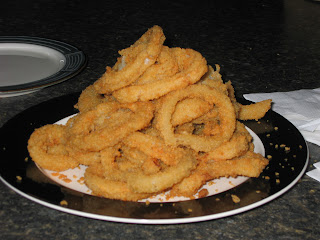 That’s right this is WHAT WAS LEFT!