Had some man time last night, geeky man time.  Dean and I got together and watched some Doctor Who, we had a couple of episodes to catch up on and a few Doctor Who Confidentials (those are the behind-the-scenes shows) as well.  I’ve been enjoying the Steven Moffatt episodes so far, but I’m a little disappointed in how he uses the sonic screwdriver.

I… I actually just over geeked myself by writing that.

Anyway, we had man food to go along with our man night: Wing Stop.

Man the more I write the more this isn’t feeling like such a manly night.

We ordered the wings online and it was the first time I’d ever done something like that so I thought that was pretty cool.  Here’s the picture: 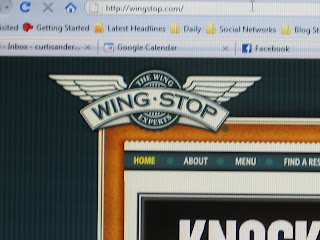