Sometimes I kind of forget that I’m still an actor.  I have been really focused on producing and so I’m not as active as I could be when it comes to “being out there” and looking for work as an actor.  I’m fortunate that I have a great commercial agent and today I had two commercial auditions.

Today’s audition adventure had the auditions separated by about three hours.  Normally that might sound like a horribly long amount of time between the two, but with one being near The Grove and the other being on 5th Street in Santa Monica those three hours were used up driving, parking, changing and getting lunch.  Even though it might sound like a grind it was a nice day to be away from the ol’ desktop computer.  I purposely only had my phone with me and so, while I was still “connected,” I wasn’t completely linked.

Today’s picture is the veiw from my table as I ate lunch. 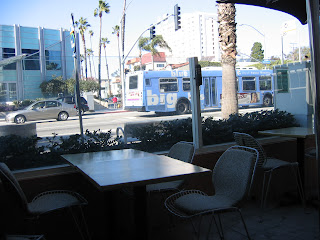 I ended up at a vegan lunch joint because I forgot my Panera Bread Co. gift card, and had split pea soup and a salad. 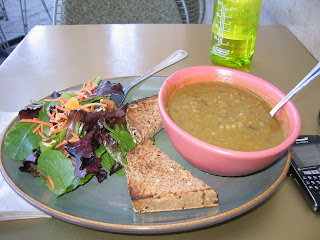 For vegan food it was good and I only had a little grit in my teeth after.  Why is vegan food always gritty?  And why is vegan bread always made with GIANT oats?  I would appreciate any answers you have in the comments.