It’s Late: A Blog of Exhaustion That I Hoped Was Delirium

It’s only 11:18pm but it feels much later and I guess that means that I’d either working hard or getting old.

It’s probably a combination of both.

I found a new blue pen.  I lost one of my blue pens and it wasn’t a great pen, but I have a real co plex about losing things even if they suck.  I once search for over two years (for real, that’s not hyperbole) for a tool kit that I had every reason to believe was thrown away.  I did find it, by the way.  It was in storage.  So I lost this crappy blue pen and it torqued me, but I found a new blue pen and it’s better than the pen I lost, so I guess that’s a decent trade!

I’m re-writing my D&D character sheet tonight on high caliber paper because the old sheet is old and starting to wear through.  I’m hoping the new paper, a card stock, will hold up a little bit better.

Rene’s birthday is tomorrow (Monday the 21st) so I hope you’ll wish her a happy birthday on her Twitter Feed.  Here’s a picture from her in the show “The Book f Liz” at The Costa Mesa Playhouse: 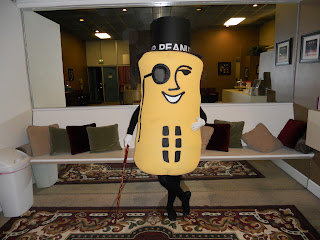