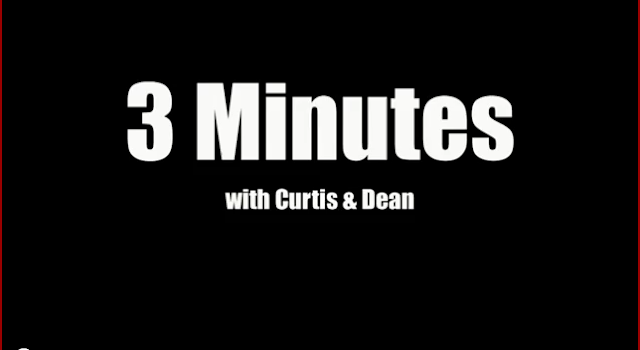 Today’s fun video is a re-post of one of the most popular episodes of  “3 Minutes with Curtis & Dean” where we discuss Doctor Who.

My history with Doctor Who is a long one, and one I don’t really get to go into in the video. I started watching with my dad back before we moved away from Wisconsin. I have a clear memory of PBS, and the Thames logo (tried to find it on YouTube, no luck), and the theme song which is still one of my favorites along with the Airwolf theme. I remember my dad explaining that he was a time lord who time traveled in a phone booth. That was good enough for me and we watched.

I started with the Tom Baker years and I saw the episodes when he changed and had my first, “This isn’t my doctor!” moment at age 6. I still can’t watch Peter Davidson episodes. He’ll always be the Doctor that destroyed the scarf. In his first full episode I kept waiting for the moment when Tom Baker would be back and all would be right with the world. All I knew about regeneration was that he didn’t die, this whole “new face/new personality” thing drove me nuts.

So I stopped watching.

I missed the Peter Davidson years and I missed the Colin Baker years, but then I found it again on PBS.

By now Sylvester McCoy had taken over and I REALLY liked his version of the Doctor. By then I was the ripe old age of 12 and far more capable of understanding the complexities of a Time Lord’s life. Also, McCoy’s Doctor traveled with Ace, and I thought she was a badass, even if all I can ever remember her saying is “I’ll go make some nitro!” Seriously, she talked about it so much there are songs about it, here’s one of them. The McCoy years get a lot of flack for their budgets, they were even lower than a normal season of Doctor Who before 2005, but I remember the writing being good. And they constantly replayed the episode with the water vampires.

So when the U.S. movie hit I was very excited that they got McCoy back and very disappointed in how “American” the movie ended up being. When the new series started in 2005, well, I was addicted all over again. And have been ever since.

Enjoy the video and let me know in the comments about shows from your childhood. Were you a Whovian? All about G.I. Joe? Get all sentimental right here on the page.