Friday – My Dog is Pissed at Me 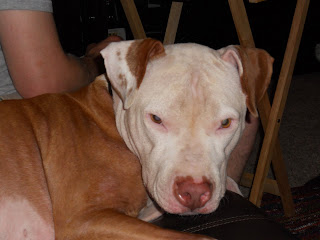 But he can’t handle the heat – not even a little.

His inability to handle heat will prevent us from ever moving to a state like Arizona and will make sure that we always have some kind of air conditioning no matter where we choose to live. It’s like he can’t regulate his internal temperature.

Well, he can, he is a mammal, but he over-heats easy.

…except I over slept.

I was up late last night, a little insomnia, and didn’t go to bed when I wanted to and next thing you know Rene is tapping on my shoulder and it is very clearly day time.

So the sun is out and baking the Earth in it’s powerful ultra-violet and visible rays and Frankie needs to drop a deuce.

Like a good doggy daddy I took him out, but, even with the wonderful breeze blowing, the sun was hitting hard and it was clear that this would not be the mile or two walk that he’s used to but more along the lines of a few blocks and then panting like a maniac back home.

This is where Frankie disconnects from reality. See, I can tell because I feel the heat on my skin that we are going to get hot pretty quickly. Frankie feels the same thing, but he’s also really stubborn and he’s convinced, as long at it isn’t already over 90, that he can walk three, four maybe even twenty miles before it’s time for a treat and a water bowl.

So we clear a few blocks and he’s already panting. I turn to make the trip back home and he freezes, holds down his head, gives me the “puppy dog eyes”, and holds his ground with his body turned in such a way as to indicate that he wants to go visit the park down the street to jump and play and frolic.

I attempt to reason with him, since he understands English, but my reasons do not catch.

I give him the “disappointed dad” look and that softens him, but he still wants to go to the park – and continues to pant.

So I am forced to give a corrective tug on the leash. That does it.

He came in, laid down and he’s been pouting ever since.

He ate, he pouted.

He drank, he pouted.

He followed the cat outside, he pouted.

I know he’ll get over it and I know that I did the right thing, but it doesn’t make seeing him sad any easier.