Frankie the Wonder Dog in The Fists of Furry! 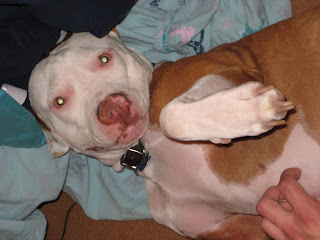 Rene bears the brunt of the abuse in the Andersen household through no fault of her own.  The abuse I speak of is from our darling dog child Frankie and this abuse happens in the night as we sleep.

Frankie sleeps in the bed with us.  This is not creepy or bad dog parenting.  If you have a problem with it I don’t care.  Normally this is fine, he sleeps, we sleep and sleep is had by all, but there are times – lately more than normal – where he has a nightmare or stretches and his little paws go flying and they tend to fly right into Rene’s back or face.  There has even been a time or two when a paw will end up in her mouth – these times are particularly unpleasant.  Rene told me about her ordeal and politely asked to switch sides with me in bed to help her get some sleep.  I agreed, because I want to be a good husband.

That night Frankie jumped into bed with us and slept on the side I was on, just as Rene had hoped.  The first few hours must have gone fine, since I slept through them, but then Frankie had a nightmare and I awoke to the quick repetitive pounding of Frankie paws into my back as he “dream ran” chasing or running from whatever dogs dream about.  I was able to adjust so that Frankie was no longer doing his impression of Bruce Lee into my back and I fell back to sleep.

A few hours later I was shocked awake by another attack – this time to the face!  His front paws whapped into my head like it was a bongo drum in Matthew McConaughey‘s house.  In my horror I opened my mouth which was promptly filled with a Frankie paw.  I was forced to grab him and flip him over so that his paws would be facing the other way.  That got me through the night.

The next day I could sympathize more with Rene’s plight, and she appreciated that.  I agreed to bear the burden of the offending side of the bed where Frankie prefers to sleep…

…Unfortunately for Rene once he figured out that she was going to stay on the other side he decided that he likes sleeping by his mother more, so her torment has begun again.  Rene has started taking eight different kinds of kung-fu so that she can defend herself.  I’ll keep you updated with her progress.

One Response to Frankie the Wonder Dog in The Fists of Furry!