Finally catching up on the comic reviews! This week I’ll be looking at War Machine #5, which wraps up the opening arc for this new series, Dark Avengers #4 which is also an arc wrap-up and Dark Reign: The Cabal one-shot.

We were left on a cliff hanger last issue with an Ultimo-virus infected Ares leading an army of Ultimo-virus infested people on a market in a middle-eastern city that is reminiscent of the current U.S. actions in Afghanistan and Iraq. This was the end of the opening arc for this title and actually utilized a deus ex machina ending which is surprisingly appropriate seeing as how our hero is, in fact, a machine. Although I normally have no problem talking about spoilers in these reviews I feel like that would REALLY take away from this book. I’m not sure if Greg Pak has found his stride in the writing yet. It feels like he’s still looking for his direction. Art from Leonardo Manco and Jay David Ramos is good, although there is a battle scene that gets a bit confusing.

I have to confess that I felt like this ending was rushed. Lots of explosions, lots of talking – like Chris Claremont amounts of talking, and, to my dismay, a complete rejection of all the fun toys that the series started with and I thought that we’d get to see more of as the series progressed. There was an especially surprising loss that I did not see coming. It remains to be seen if this missing bit of hardware remains gone in the coming issues. Come next month I’ll dish about all the details, after you’ve had a chance to look at it, but when push comes to shove this whole arc was just a way to introduce us to the War Machine main cast. They have a great tableau on the last page. We’ll see what issue six brings. 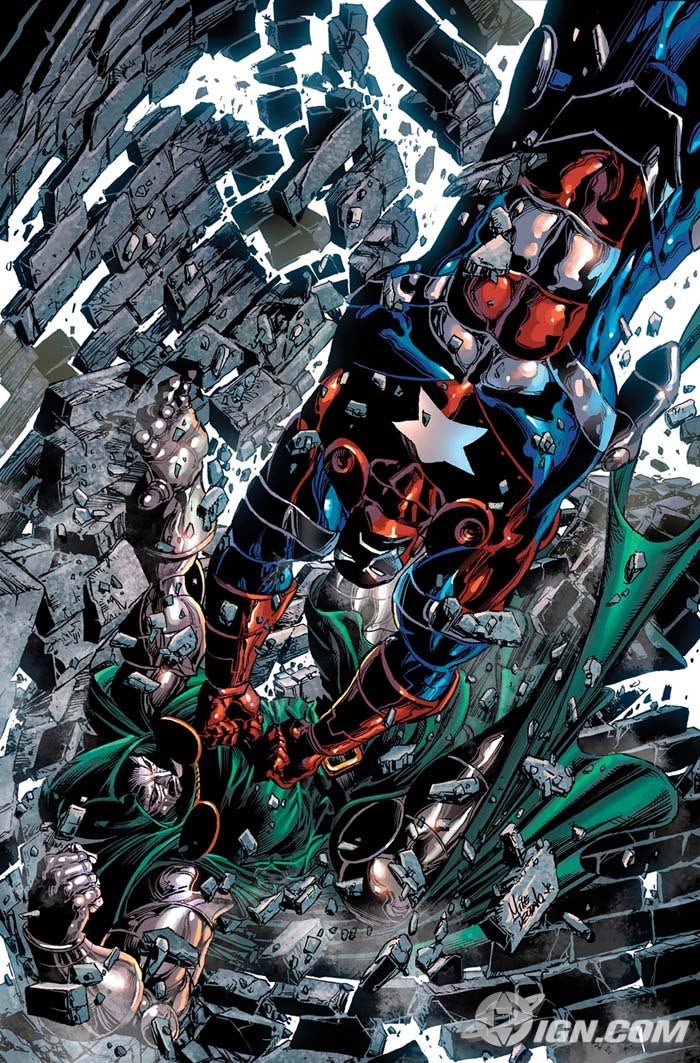 Doctor Doom and the Dark Avengers vs. Morgana LeFey! After last months cliffhanger it was pretty clear to see how this was going to go. Doom and LeFey go at it. Doom wins. This has been a crazy “woman scorned” story. Sure when most girls feel used and unappreciated they get upset, but very few send demons and magic to destroy the object of their anger.

Doom does not kill LeFey, but does trap her in the past where if she dies it won’t effect the future time-line. There’s an interesting bit here in the art where a bunch of cavemen are being chased by a dinosaur in 1 million B.C. The science guy in me wants to say, “Dinosaurs in 1 millions B.C.?!!?!?!!? WTF?!?!!?!?” But with all comic books you have to throw that out and I’m happy to do it, I just wanted to bitch about it a bit first. Cuz I’m an ass.

We also get some good character stuff in this issue, although that’s to be expected from a Brian Michael Bendis book. The fledgling relationship between Moonstone and Noh Var blooming and the palpable hatred between Mac Gargan’s Venom and Bullseye… Actually I feel that this deserves some discussion. So Venom gets controlled by LeFey and bites Bullseye. Bullseye tells him, in the heat of the moment, that he is going to kill Venom. After the fight is over Venom apologizes noting, again, that LeFey was controlling him. Bullseye replies, “Gargan, hey, don’t worry about it. You know and I know I’m going to kill you. One day you’ll be dead and you won’t even know how.” That’s some cold shit. Also, it looks like The Sentry is dead – until the very end when he comes back in a burst of light prompting all who see it to wonder if The Sentry is even killable and what they would do if he ever went completely crazy. It’s a good question. At least Tony Stark had a solution.

And we see the seeds of the Dark Avengers’ reaction to Clint Barton calling out Norman Osborn on national TV. I’m guessing that will be a big part of next issue.

One last thing, I’m not a fan of the art on this book. Mike Deodato is clearly talented but the sketchy rough style just isn’t my cup of tea. Totally a personal thing, but it also means I don’t have much to comment on it. 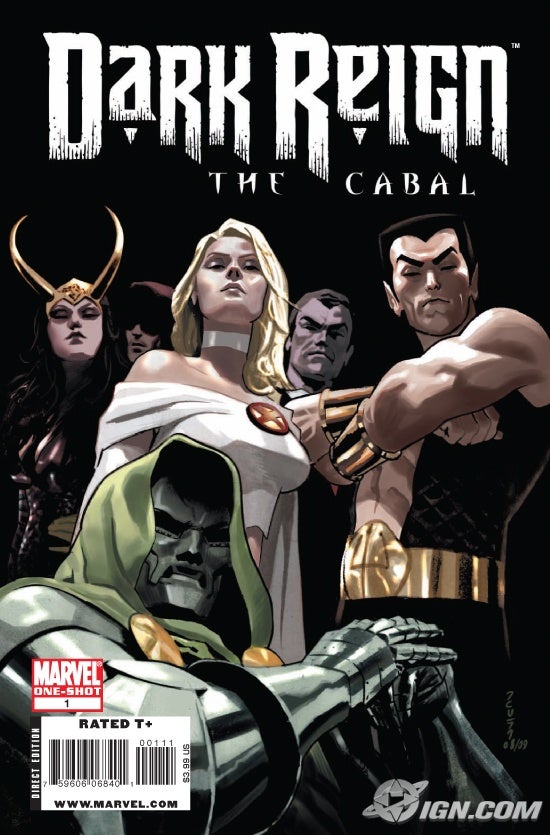 I’ll keep this short because It doesn’t need much comment. These are stories that are supposed to show the motivations, or small manipulations, that Emma Frost, Namor, The Hood, Loki and Doctor Doom have for joining/using The Cabal. The stand-out story is the Doctor Doom story by Jonathan Hickman and Adi Granov.

I have always been a big fan of Adi Granov’s art! Ever since I saw his work on Iron Man. It all feels very real to me and I like that. Mr. Hickman’s story is a great glimpse inside the mind of Doom. We see him imagine how he is going to turn on the other members of The Cabal and take over – with no small amount of help from the cosmic cube. If you are a Doom fan at all you’ll get a real kick out of how this all goes down. Unfortunately it really set up my expectations for the rest of the issue and it fell really short for me.

The Emma Frost story shows how much of a survivor Emma is and helps bring new readers up to date with who she is exactly and her super-villain roots. Normally I REALLY like Matt Fraction, but I felt like this story was phoned in. Art by Daniel Acuna is moody and detailed, but since the story follows her roots and not a real narrative it’s just snapshots of her past.

The Hood story actually shows his human side pretty well, but feels so much like an after thought, and while I feel like the end reveal is designed to show us how ruthless he can be, I ended up walking away with the idea that he’s just a big hypocrite who is bound to turn on his followers sooner rather than later. Rick Remender tells a perfectly functional story and Max Fiumara does a good job bringing us into The Hood’s world, but it was so moody that I didn’t feel any difference between his home life and his “work” life. Maybe that was the point, but I wanted to see a difference.

The Namor story is like the classic King Solomon tale from the bible: he is judge over a custody battle between a warrior father and peaceful mother. when it all gets broken down it turns out the child in question is a powerful mutant. So Namor takes him in as his ward. It felt like a whole lot of set-up for a new character that will follow Namor around. It remains to be seen if we ever see this character again. If we don’t then I’m bummed I spent the time reading it. Kieron Gillen wrote this one and Carmine Di Giandomenico did the art. I really liked the art, it felt very Aeon Flux to me and I like that look.

The Loki story, by Peter Milligan and art by Tonci Zonjic, was really more of an explanation of how Asgard got permission to move to Latveria. It was an eight page reveal about moving to Latveria. That pretty much covers it. Art was very “silver age” in my opinion. I felt like I was reading an older book. I liked that, but really would have preferred to have learned more about what Loki wants out of this group or something.

Eh, if you pick it up I don’t think you’ll be disappointed, especially if you like doctor Doom, but if you miss it don’t beat yourself up.

I am going to go pick up this week’s books this weekend. Probably have the new review up Wednesday or Thursday.