The Most Important Part of Sundance 2011 – The Sundance Beard

I’m growing a beard, but not just any beard A SUNDANCE BEARD!

Why a beard for Sundance?  It’s a bit of a story, see I grow facial hair like a sixteen year old girl.  Fer reel!  I’ve tried on a few different occasions to see what I’d look like with some kind of mustache or beard, lots of guys do, and every time it has ended in failure.  Sure the hair grows, but not in a full, lush way like on Burt Reynolds instead it looks like Shaggy from Scooby Doo.  My Dad has a full beard and has had one since his early twenties so I manage to trick myself into thinking that eventually I’ll be able to grow one too, but with every attempt no dice.

Then came November 2010.  I had not shaved for a week and had a bit of fuzz on my face.  As I was getting ready to shave I thought, “Sundance is coming up and my face freezes every year.  Other guys have beards, I bet that helps.”  The light bulb dinged.  I decided then that it was time to attempt to grow a Sundance beard!  I forgot to mark the day that I stopped shaving, since I stopped before I made the decision, but I’m pretty sure it’s been about five weeks.  I look like this as of today: 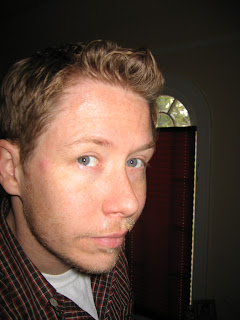 There’s some trimming that I should do and it could stand to grow in a bit more, but I’ve got about three more weeks before the festival and my hopes are high that I’ll have a manly beard in time for the snow.

Of course if I have an audition between now and then it has to go – but I’m pushing for a Sundance debut!