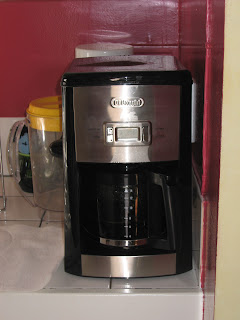 It’s Sunday morning, the coffee is brewing and I’m a bad blogger.

Normally I feel like it’s customary to write a “What I’m Thankful For” post – I see them all over the blogosphere – but do you really care what I’m thankful for?  The things I’m most thankful for (family, wife & dog) you can probably guess and I don’t know that any major epiphanies are going to rise out of discussing them however, in a kind of weird associated way, Thanksgiving at my parent’s house did get me thinking.

Rene and I went to my parent’s house on Friday – we had two separate days of Thanksgiving, one for each family, this year – and after all the turkey was gobbled and we were sitting around double bloated from that dinner and the dinner from the night before Rene reminded me that this would be a prime opportunity to play Just Dance on the Wii and try to work off some of the mountain of food that we ate.  I had forgotten the game at our house (we had taken it to her parent’s house the night before) and needed to go get it.

On the drive back, with the winter light, the smell in the air and powered by the sentimentalism that goes along with the holidays my brain somehow was reminded of a conversation that I had had back in high school with my friends Jeff, Scott and Dan.  It was one of the kind of conversations that you have when you’re “16 and angry” and you’re tying to figure out your place in the world.  The way I remember it Dan had been talking with his parents about something, I believe it was how much he thought high school sucked, and his dad told him to try and enjoy high school because they were the greatest days of his life.  Dan took a great deal of offense to this and told us that if these were the best years of his life then he must be aiming too low.  Then I completely agreed with that!  I still do.  All of my greatest years have come after high school – all of them – but it took until Friday evening for me to really see what people mean when they say that the high school years are the greatest years of your life and finally I see that it isn’t about the accomplishments but the opportunity!

High school is the last bastion of childhood before adulthood.  We throw out the term “teenagers,” but in reality that term is just a marketing device designed to convince 12 to 17 year olds to spend their parent’s money on stuff that only 12 to 17 year olds want.  They are the last years where you have the guaranteed safety of family and school and you can test your boundaries without risking your future beyond the school year.  It is four years of opportunity just waiting to be used populated by by the very people who will willingly choose NOT to use it.  It’s a wonderful juxtaposition.  Adults looks back and think of the different number of things they could have done while teenagers knee deep in it barely scratch the surface.

When I think back on my high school years I have very little that can pass as a regret, my high school experience was pretty good, and although they may not have been the greatest years of my life I unwittingly did make quite a bit out of them.  Even still I know that there is more I could have done.  I will always wonder what it would have been like if I had accepted that position on the wrestling team, if I had taken student government just a bit more seriously or not abused the absence policy my senior year.

…Who am I kidding, the absence policy needed abusing.

So if you’re reading this and you’re still going through high school I hope that you’ll take advantage of the different opportunities that are there for you and enjoy them.  I know that it can seem like the pits – I remember – but even the pits are nice to look back on later.