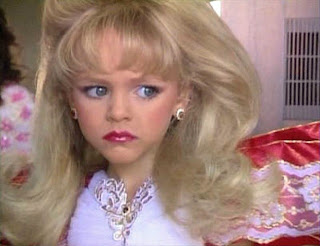 I was going to do an update, be boring and awful mostly because the last few times I’ve sat down to write I’ve just been completely empty. I’ve had nothing. All my juice has been used working – and that’s a VERY good thing! Things are really kickin’ and I dig it.

And not just for me, but all the people around me too! Sometimes I think the good stuff gets lost in the shuffle, but it’s all there, the signs of cool shit popping up everywhere and I think that this can all be illustrated by the new season of “Toddlers & Tiaras.”

You heard me, “Toddlers & Tiaras.”

Say what you will about the show, the parents on the show, whatever damage you believe the children will have but this is some serious quality television.

And by television I mean high end performance art where the artist is an editor and director and the subject is a focus of glamour that society strives to achieve against any kind of reason.

You might think I’m kidding or trying to be ironic or funny – but I’m dead serious. This show is a microcosm of a society that allows Kardashians to be celebrities and TMZ to be a syndicated hit.

Programmers and studio executives always want to know what’s going to “sell” or “work” in middle America and the cynical of us kind of always knew that, when dealing in lowest common denominators, this is it. Keep it young, dress it up and cover it in so much paint it’s unrecognizable and you have something that people are ready to watch.

…but when you need a paycheck suddenly principle and creativity take a backseat to what you can sell and then the self-fulfilling prophesy takes hold and suddenly you are making the very content that just last week you were railing against in your blog.

That last line sounded really biographical but it wasn’t. I was trying to make a point. I’m in a much more satisfying place creatively… which is probably why I’m broke.

All that aside I am looking forward to the rest of this T&T season.