Here’s the first of what will probably be a regular feature here on the ol’ Curtis Andersen Super Blog! I’m doing my last two weeks worth of books. See you in the comments! 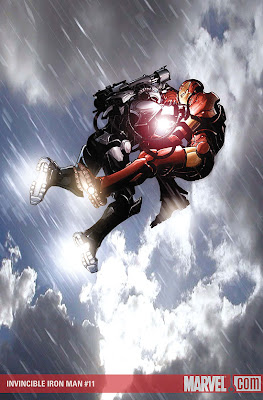 Iron Man. My favorite and, even if I slack off on writing comic reviews, I will always do my best to review this one. Invincible Iron Man started it’s new volume when the movie came out, so this is only issue 11. Matt Fraction is on writing duties and he has promised a VERY tough year for the Golden Avenger. So far he is delivering on his promise. As part of the Dark Reign story line Tony Stark (Iron Man)and Maria Hill (ex-deputy director of S.H.I.E.L.D.) are on the run. As promised by the cover Tony fights War Machine (his best friend James Rhodes for you newbies), Maria stumbles on a dangerous secret while trying to recover information for Tony and Pepper Potts tries out a new gift that Tony left for her before he went on the lamb. I enjoyed this issue, but it is part of a bigger story arc so it is worth buying the other issues or waiting for the trade. Tony is running around in his “Heroes Return” armor which, while one of my favorites, keeps being touted as being “old” and really outmatched by everything that gets thrown at it. I like that Fraction makes such a big deal about how quickly tech can go out of date, but it was only a couple months ago that Tony was fighting the end of the Secret Invasion in his classic armor, and that seemed to hold up just fine against an alien advanced civilization. A nit pick for sure, but still. I love Salvador Larroca on art and next issue Shell-Head fights Namor, the Sub-Mariner! If you like Iron Man at all you should be buying this series! 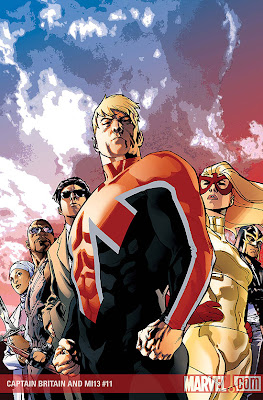 Captain Britain & MI-13 is a great UK-centric book! One of my favorite cities in the world is London and the fun and magic of the country is very present in this series. Paul Cornell is writing and Leonard Kirk is penciling. Paul is English and it definitely shows. Right now Dr. Doom and Dracula (yes THAT Dracula) are attacking Earth from a castle on the moon. It’s AWESOME! Our heroes are the MI-13 division of the UK government. That’s the super hero division. All of the UK’s super heroes fall under its jurisdiction. Pete Wisdom is their leader, but Captain Britain is the figure head. Cap B has a new power set now where his abilities are all dependent on his self confidence, which is a neat device, although so far we’ve really only seen the ramifications of that in one issue. The other heroes include Blade, Spitfire, The Black Knight and a new character named Excalibur. This is a fun book that is easy to pick up no matter what number it is. I strongly recommend grabbing this one and adding it to your pull list. 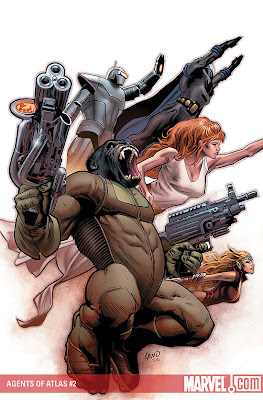 Written by Jeff Parker and art done by Carlo Pagulayan and Gabriel Hardman & Elizabeth Dismang Breitweiser, Agents of Atlas is new to me. It follows characters that used to be part of the Marvel Universe when the company was still called Atlas comics. Now they use the device that they work for a group called Atlas, but the meta-knowledge makes it more fun. It would take me a really long time to explain it all here so I’m linking you to the Wikipedia article here! This book is also part of the Dark Reign storyline and an old Iron Man villain just joined the ranks so I’ll definitely be reading this arc. 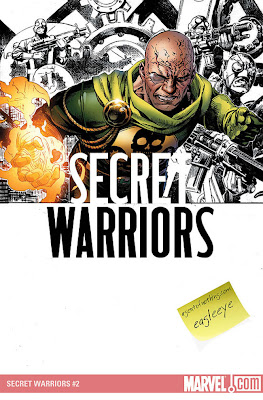 Secret Warriors Nick Fury: Agent of Nothing is an AWESOME spy book! Brian Michael Bendis and Jonathan Hickman are crafting a hell of a mythos! In this issue we see Hydra come back to full power and a secret gets revealed that shakes Fury and the whole concept of SHIELD to the core. I do have some complaints about this book: I’m not a huge fan of the art. Caselli is good, but I’m not personally a fan of the “soft corner” style that he does. Also, I’m really not sure who most of the characters are even though there was an entire special issue dedicated to saying who they are. What I do know is that they are the children of older heroes, kids that really didn’t want to embrace their powers. It makes for an interesting dynamic. Regardless, I’m going to keep getting this book at least through the first story arc. 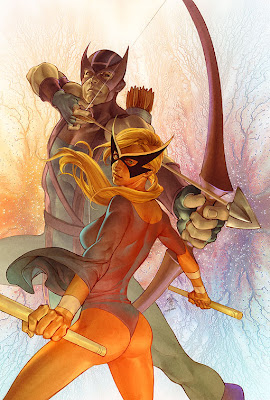 The Reunion Limited Series sees the return of Hawkeye and Mockingbird of West Coast Avengers fame! Mockingbird has a secret she’s keeping from her (ex?)husband, Hawkeye and AIM is involved. Really all the super heroing is just an excuse to bring back together one of the greatest comic book couples of all time. I only recommend this one for Avenger fans. I have a feeling that this one is going to get pretty geeky and continuity heavy so that’s my take for what it’s worth.