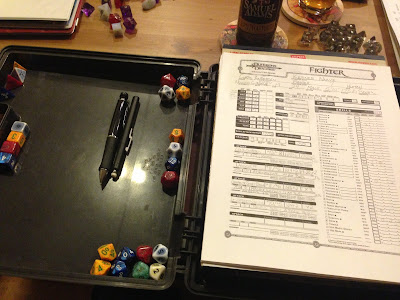 I’ve never been ashamed of my geekiness. Even though I don’t have much time for it, I don’t think I’ve made much of a secret that I’m a Games Workshop player and that I have been playing RPGs of some kind since junior high, primarily Dungeons & Dragons.I’ve been playing with the same people, more or less, for over 13 years. In fact I’m blogging from our monthly game right now!D&D has definitely experienced a bit of mainstream exposure in the last few years. Chief among them being the D&D episode of “Community.” Really, when it comes down to it, I can’t argue the geekiness of the game. Role playing games require a certain amount of commitment and storytelling, but if you like telling stories and aren’t too shy about sounding silly at a table with your friends then it is definitely worth trying.Now I’m going to go. We are transporting a wagon on refugees to the last bastion of human resistance in this fantasy world. I need to go chop up some Orcs.See you next time!