Tonight I proposed to my girlfriend Rene Bordelon and she said yes.

Here is the story leading up to the moment:

Got the ring by chance.  I was with a friend after a contract meeting and he needed to go do some business for jewelry he was picking up.  While I was there with him my eye caught a glimpse of the estate jewelry.  I was looking at another ring when they pulled out a wedding set that had just come in the day before – it was perfect!  By a fortuitous happenstance I was able to acquire the wedding set much sooner than I thought and suddenly the clock was running to propose!

In order to make sure that I proposed in the best way possible I went to Rene’s best friend, Karen, and we had the “How to Propose to Rene Summit.”  After a good 45 minutes discussion and at least a dozen ideas tossed around we returned to her original suggestion: propose to Rene on stage at the Maverick Theater during an Improv Shmimprov show.  After the decision was made I got on the horn and called Nate, one of the men behind Shmimprov, to ask if it were possible.  He said yes, so long as I did the show that night as well since they were down a team.  It was an easy bargain to strike and by the end of the afternoon Amber and I were a team and Karen had convinced Rene to go out for her “birthday” – a subtle trick to get her out of the house and in Fullerton on the night of the event.

The plan was set, Rene had no idea what was going on, Amber and I had created some deceptively subtle references in out act that would involve marriage, Nate and Jamie helped craft the order of the show so that it made sense and wouldn’t interfere with the March Madness shows going on, Jeff Garvin of 7k was going to be providing music at the show – all was going according to plan…

…and then Rene got sick.  Really sick!  She’s still sick!  She got that really gnarly cold virus that has been going around and suddenly we, Karen, Rene’s mom, my mom and myself, were terrified that she might not want to go out ona night when she was still sick.  So we did our best to make sure she was better!  Meds, Jamba Juice Cold Busters, wheat grass shots, more smoothies – anything that suggested it might make someone healthy.  Rene mentioned that she thought it was weird that we were all trying to make her get better, to the point where she started getting a complex thinking that we found her annoying when she was sick.  We didn’t.

After all was said and done she made it out to dinner and then to the show.  I promised Rene that she could tell the story of the actual proposal and her reactions to it in her blog, but I can tell you that, even though I was pretty sure she’d say yes, I was REALLY nervous!

Today’s picture is of the moment: 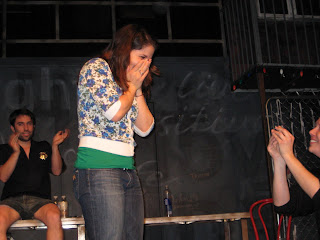