It’s only August, but just the other night I got a hint of a scent in the air that was unmistakable to me as Autumn. I don’t know how to describe it other than wet and earthy. It’s a smell that reminds me of October and all of the Americana that goes along with it: changing leaves, costumes, Halloween in a Normal Rockwell kind of way, and the best parts of my adolescence.

There are certain smells that just go with things. Football players talk about the smell of the field before a game.  I remember that smell, there really is nothing else like it. It almost smells as if the field is sweating before the game begins. The other day at a rehearsal for “Rope” I caught the scent of  a very specific hairspray in the dressing room, a hairspray that I’ve smelled in dressing rooms for decades and with that one contact I was suddenly reminded of all of those shows. The Autumn smell works the exact same way and triggers some of the strongest nostalgia I feel during any given year.

Every year, usually later than now, when the air starts to change and the nostalgia comes on I find myself searching though my music to make a playlist appropriate to the season. I started doing this back when I was a teenager, making mix tapes on my dual cassette/CD stereo system. There was more of an art to it back then. People had tape lengths that they liked to work in (I was a Memorex 90 minute man, myself) and you’d have to plan out your songs and hope that they would fit each side perfectly. I became very good with the Play/Pause button and mastered the length of the tape lead before it started recording. I could do it by feel, no counting required. Somewhere, deep in boxes that probably haven’t seen the light of day in at least a decade, there are dozens of mix tapes made from my music library circa 1990-1996. These tapes were with me during car rides with my friends when we first felt the “freedom” of being teenagers with cars. They were there for early relationships and the break-ups that went along with them. They were there for my first cigarette and for my first sips of Boones Farm Strawberry Hill. They were the soundtrack to my coming of age and represent all the songs that meant something to me at the time. They were also a pretty good representation of alternative hits and underground bands of the time.

My friends did it too, across the board. We’d listen to what each other made, finding new songs that we liked and new bands. My friend Jeff introduced to me to Oingo Boingo, Voice of the Beehive and October Project this way. I discovered that my friend Dan and I had a mutual love of The Cars and The Police this way. And my friend Scott exposed me to the power of Bad Religion and Pennywise this way. Entire backyard parties were powered by these tapes. They were teenage sorcery that could help bend the mood of entire rooms full of hormone fueled basket cases.

Technology changed and iTunes and iPods made it very easy to generate playlists based on whatever mood you were in at that second. Gone was the finesse of tape creation; instead you could just slam together song after song on a whim. I remember sitting at the computer for hours at a time, days in a row plugging songs into the playlists where I felt they belonged. I had the perfect list for whatever mood I was in. It was pretty awesome… until the crash of 2007 when iTunes and all of my playlists crashed and burned. That killed a lot of the fire I had for digital playlists. So much time was spent creating things that were wiped away in, literally, a moment.  After that it took until I discovered Spotify before I felt that a digital playlist would be worth creating again. I haven’t created as many playlists as I did before 2007, but I do find that the ones I curate now get a lot more play.

I started a new playlist for autumn 2015 on Spotify. It’s the start of something that will probably get bigger as the days get shorter and the air gets crisper. I’m sharing this because I selfishly want you to share your playlists with me. Back in the day we would swap tapes and CD’s, but now we can toss entire playlists around digitally. This playlist is full of songs that take me back to being sixteen-and-angry, ready to rage against the world… as soon as I finish my journal entry about no one understanding me. It’s what I would want to listen to on a rainy day, hence the name. Check it out and let me know what you think, but more importantly share your playlists with me. Drop them in the comments and show me something new. I want to try and capture that feeling of sharing music again from back in the day. Whether it’s a favorite album from your favorite band or a playlist of your own creation, pop it in the comments and let’s hear something new. 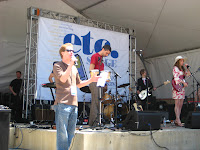 I have quite a bit of blog catch up to do. I have a bit of time to do that today, not a lot but a little. On a side vent, iTunes Genius is one of the most inconvenient convenient things ever. It takes for-bloody-ever and it does so little. I just saw today that you can stop it. My computer is happier for that.

There is a pretty good schedule of blogs coming up! Have the comic review tomorrow, another one later this week, the wrap up from the Festival of Books…

The LA Times Festival of Books is a great two day event. Up until Ron Morrisette told me about the job I had never heard of it. Apparently I have had my head in the sand for fourteen years! Taking place on the UCLA campus it is a celebration of the written word in all of it’s forms. It’s like the ComiCon of the literary world – pretty overwhelming when you don’t know what you’re in for. I can’t speak on a lot of the event because I had to stage near the Etc. Stage, but I got to wander a bit and, I swear, that whole campus was covered in booths with people seeling all kinds of books and every author under the sun signing their books. There were panels, reading, and plenty of celebrities shilling their new tales – and I heard about how much ghost writing goes on behind the scenes. I learned a lot.

On the Etc. Stage specifically we put on a really good show. We were in direct line with all the traffic coming and going so just about everybody had to pass by us at least once a day. There were a lot of acts:

– We started Saturday with an interveiw of Ingrid Law, author of “Savvy.”

– Then the dancing started with The Susie Hansen Latin Band!

– Peter Yarrow of Peter, Paul & Mary was next. He was there to perform a few children’s songs and sign copies of his children’s books. This is worth a bit of time to tell a story. I met Mr. Yarrow by the sound booth as Susie was finishing her set. He asked me to deliver a very specific intro, which was no problem. The way the day worked we had 10-15 minutes between each act to set-up and do sound checks. We got to his set-up time and I was waiting for the “all clear” signal to do his introduction, when he suddenly decided to just start. No sound check, no intro, just BANG! Then he went over by almost 15 minutes! Folk singers, they are nothing but hell raisers! It was funny, but he was also THE most popular act we had on that stage for both days. Very kind, he made sure that he signed everyone’s books and was very nice to everyone. That was nice to see.

– The Andrew Bently Band was next with some solid retro alt rock.

– Then there was a reading from “Land of a Thousand Dances” by Tom Waldman & David Reyes with a performance by Lysa Flores.

– WriteGirl, a mentoring program designed to help girls develop their creative writing, was after that.

– And we finished up the day with a panel by BOOM! Studios. They make comic books. Mark Waid was on the panel. I totally geeked out on him. It was slightly embarrassing. 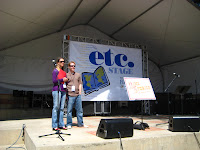 Sunday was a great day! Rene got to come up and visit and we started off the day with a bang!

– Lady Danville opened us up and they were AMAZING! Great guys, great music. I ended helping them sell merch, cuz they didn’t have anyone to do it, and they sold out. It was awesome.

– Then Culture Clash, yes the same one’s from the TV show, did a reading from some of their new plays. Funny and insightful.

– Courtenay Green was next with her band – which included a glockenspiel and a tuba! Most of my pictures in this blog are from that performance because Rene was there for that and had her camera.

– Dime Stories, stories three minutes in length read by their original authors, was next. This caused a bit of controversy because we were a VERY public stage and some of the stories – all of which were quite good – contained less than child safe language. You haven’t lived until you’ve heard a middle-aged woman shout “FUCK!” into a microphone that broadcasts to a whole campus. We got some compalints. Still, the stories were really good and two of my favorites were, wait there were really three that I’d like to mention, one where a dad was “laying off” his youngest daughter because of the economy, one where a guy woke-up in the middle of the night to find out that all the dogs in his neighborhood used his back yard for cocktail parties where they drank cocktails, danced, and discussed important issues in dog language. I really liked that story. The other story I wanted to mention was written as a letter to her sister and explained that their grandmother hadn’t disappeared all those years ago, but that she had stumbled onto a fountain of youth. It was touching and clever.

– Then the day ended with UCLA’s own Awaken A Capella. Go to Spring Sign next time and check them out.

I really feel like my Twitters and mobile blog kind of covered a lot of what I wanted to talk about so I think I’m going to cut it short here. I hope I get the opportunity to do this again next year. I almost felt bad getting paid to have as much fun as I did!

Filed under Festival of Books, iTunes