My name is Curtis Andersen and I have been an entertainment professional for over 30 years.

I started working professionally when I was 8 years old and haven’t ever stopped, but some years were definitely better than others.

From eight through my mid-twenties I made my primary living as an actor, you can see a list of most of what I did at IMDb. But then in 2005 I thought I’d have more control over my career if I tried producing. It went fine, made some movies; sold some TV shows; and made a lot of music videos, but something was always missing. It was not creatively satisfying, at least not in the way acting is for me, and a majority of the job was hunting for financing. I don’t know if you’ve ever tried independent film financing, but I don’t recommend it. It takes a lot of time to get a “yes” and then there are a thousand ways that are beyond your control where that “yes” can suddenly turn into a “no.” In 2012 I lost the funding for three projects on the same day – it was the next six months worth of work – and I started thinking that being a producer was probably not the path I wanted to follow.

At the end of 2014 I was ready to be done with producing. I was very pleased to be a part of the first year of Fun Size Horror, but found myself having a lot more fun being in the shorts than being behind the scenes. That’s when the final decision was made – I needed to be a working actor again!

That being said, becoming a working actor in Hollywood, even when you were one for over 20 years, is not easy. It takes dedication and persistence and a lot of hard work. I’ve decided to chronicle my path back both here and on my YouTube channel. I’ve created a playlist of the videos I’m shooting, you can see it down below:

I’d love to hear your comments as this keeps going either here on the blog or on the videos.

Let’s see if we can make the nickname “Television’s Curtis Andersen” a reference to me in the present instead of the past.

First of the Year Dash!

THIS IS GOING TO BE THE YEAR THAT I DO IT BECAUSE IT’S JANUARY FIRST AND NOTHING CAN STOP ME!!!!!!!

I would be lying if I didn’t cop to having these feelings. Every January is the beginning of a new year, it feels like the slate gets wiped clean, and since most people have time off it is really easy to start new things or try to make new habits. This leads to gym memberships, hobbies, playing musical instruments, writing, the list goes on and on. Just last week I posted a half assed resolution post about getting re-focused (which I’m totally sticking to, by the way).

But here’s the problem, by March a lot of resolutions and plans all fall apart, or at least show signs of cracking. After I wrote that post about focus I started thinking about what that was going to mean for the rest of the year. 2015 is kinda’ spoken for as of now. Fun Size Horror 2015 is going into early prep, there are shows to do, and I’m mapping out my teaching/speaking schedule. That doesn’t even include any acting opportunities that may pop up. If I’m 100% honest with myself, that means that I have very little that I can safely commit to and the new year is just starting. First World problems for sure, but I’m the kind of guy who is going to be upset about having to say “no” even when it’s the responsible thing to do. So I had to take a pretty hard look at myself and what I know I want to accomplish this year and examine why my best intentions in previous years always seemed to drift into trouble.

I am not going to speak on how this affects people in a general sense, I don’t have the qualifications for that, so everything that I talk about in this post refers to me personally. Looking at my past, you don’t even have to go that far back to see good ideas and habits get dropped – perfect example: 52 in 52. Not managing to stick with this actually upset me quite a bit. It’s an idea that I was/am really excited about. I was pleased with how things were going, but a story a week ended up just being too much. To be fair, the things I gave it up for; Fun Size Horror and all the shooting we were doing; were absolutely worth it, but it still stings.

I won’t lie, my gym membership has been pretty useless for a while now too. I just don’t make the time for it. I should (who shouldn’t?) especially since I spend so many hours in a chair, but my discipline is bad when it comes to the gym. And eating better. I still eat like I’m in college. Rene has made some noble in-roads and had some effect, but I still love me some cheeseburgers.

So how does it come to this? What gets in my way to keep me from achieving the desired goals? Goals that pretty easy to achieve in a practical aspect when it comes down to it:

These are not small resources. But then I take an honest look at what gets in the way:

Most of these I can get past. Lack of time usually translates into lack of rest. Instead of doing the things I’d like to do when I’ve completed what I have to do I fall down an internet rabbit hole of YouTube videos and random Wikipedia research because my brain is tired. A quick nap is usually the best fix for this or turning in early if I can manage it. Distractions are tougher, but that’s what this year is about fixing. For example, I should have completed this post hours ago, but I got distracted by an episode of “This Week Tonight” and ended up marathoning about ten episodes. Avoiding distractions is going to take a little practice. Trepidation of trying something I have no experience with, more commonly known as “fear of the unknown” or “resistance” by Steven Pressfield in his book The War of Art (which I highly recommend for everyone and have a link for at the bottom of this post) is something that I prefer to face head-on. I find that once you realize that everyone has to do something a first time it’s actually just a matter of girding yourself up and charging forward. The War of Art suggests a lot of great ways to achieve this. I can’t recommend it enough.

Lack of funds – this is the big one. Money is such a sensitive thing. There’s a certain amount of investment that you need to make into anything you do, that’s just an economic reality, but I hate parting with any funds unless I can “see” the return or a way to recoup. This only makes me pinch pennies more when  those envisioned returns don’t show up. If I had unlimited funds (c’mon lottery!) or a benefactor (c’mon mysterious uncle who won the lottery!) I would probably feel differently about this but, put on news announcer voice in these trying economic times, it’s a tough thing for me to get past.

Putting all of these things down on “paper” makes them feel manageable. Putting them out in public makes me want to take ownership of them. Knowing that this makes me vulnerable to scrutiny makes me want to be responsible. Sometimes it takes the possibility of looking like an idiot to motivate you.

…Of course you can always end up looking like an idiot anyway, but if I let that stop me I wouldn’t have had a career.

How are you doing this far into the new year? Let’s talk in the comments.

For four weeks I will be gluten and sweet free.

Not sugar free, “sweet” free.
No honey, no sugar, no agave nectar, no artificial sweeteners, no sweet additive whatsoever.
Why am I doing this, you may ask? The long and the short is this:
Oh, and I guess being kinder to my body isn’t a bad reason either.
In preparation for these next four weeks I had already started weening myself off of sugar – I stopped adding it to my coffee, put the kibosh on soda pop, lowered the intake of donuts, you know, the usual. But what I didn’t expect was that “weening” and stopping cold turkey would have surprisingly dramatic effects.
This blog was actually due to come out a couple days ago (along with a few others that are sitting here in draft form) – but it didn’t because I was completely listless. It took all of my concentration to work yesterday and then the idea of doing anything beyond that was unthinkable. I had headaches and just didn’t feel like myself.

On the 24th, my last day for food freedom, I did indulge a bit much.

I had a muffuletta from New Orleans:

A cannoli, also from New Orleans:

And some New Orleans King Cake: 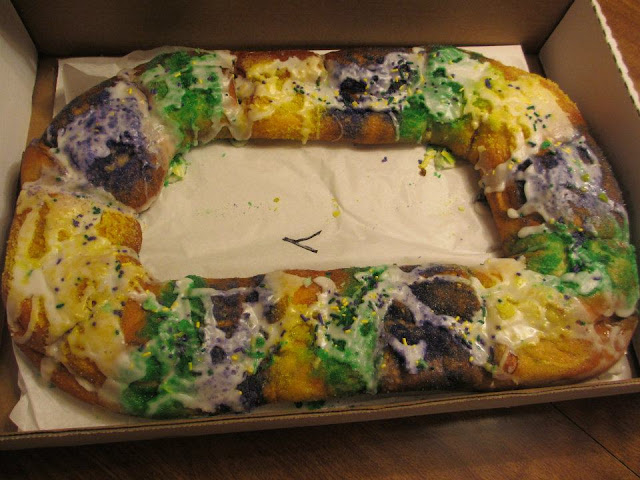 I would have taken pictures of the actual items instead of finding these images on the internet, but I ate them all so fast I didn’t have the chance.

Between working out and cutting ALL sugar I’m hoping that the summer beach bod will be in full effect sooner than later.

I’ll update as it’s worth updating.

Filed under challenge, food, getting fit